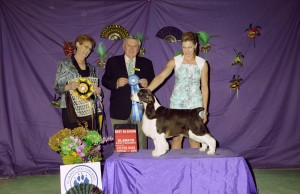 Dog Shows are the most frequent and best-known events regulated and promoted by the American Kennel Club. Thousands of them are held annually in communities across America.  They celebrate and help to preserve the distinctive features of different breeds, and they provide a forum in which dogs are evaluated for future breeding programs.

At shows, whether for one breed or many, dogs are competing for one to five points, which advance a dog toward the coveted title of Champion. It takes fifteen points, awarded by at least three different judges at separate shows to earn a Championship.

Dogs are judged against their breed’s standard. Each of the over 140 breeds recognized by the AKC has its own written standard. Standards describe the ideal size, color and temperament of each breed, as well as proportion, structure and movement.

At the largest all-breed shows, thousands of contestants are narrowed down to a single dog – all in the course on one day’s judging. To accomplish this, judges must be able to recognize not only how well a dog conforms to its breed standard, but also the inner qualities that animate the spirit of a champion.

Dog shows are the backbone of the AKC’s network of more than 4000 member and affiliate clubs. Each year, hundreds of thousands of fanciers enjoy them, as participants or spectators. They are an important contribution to America’s culture and economy and reflect the satisfying bond between man and dog.

There are six different regular classes which dogs may be entered. They are offered for male and female dogs separately in each breed.

Twelve-Eighteen Months Novice – Never won a blue ribbon in any of the other classes, or has won less than three ribbons in the novice class.

Bred By Exhibitor – The exhibitor is also the breeder.

American Bred Dogs – Parents mated in America and the dog was born in America.

Open – Any dog of that breed.

The groups winners are brought into the ring where they compete for BEST IN SHOW, the highest award a a dog show.

The Seven Groups
in All-Breed Shows

These dogs were bred to hunt game birds both on land and in the water. The breeds in this group include Pointers, Retrievers, Setters and Spaniels.

Were used for hunting game by sight or scent. These breeds include such dogs as Beagles, Bassets, Dachshunds, and Greyhounds.

These dogs were used to pull carts, guard property and for search and rescue. Among the breeds in this group are the Akita, Boxer, and Doberman.

This is the largest group, with breeds including the Airedale, Bull Terrier and Scottish Terrier. Terriers were bred to rid property of vermin such as rats.

These dogs were bred to be the prized companions of royalty. This group includes little dogs such as the Chihuahua, Maltese, Pomeranian and Pug.

Includes the Chow-Chow, Bulldog, Dalmatian and Poodle. These dogs share attributes but don’t fit into the mold of other dog groups.

These dogs were bred to help shepherds and ranchers herd their livestock. Among this group are the Briard, Collie, German Shepherd, and Old English Sheepdog.